If you have ever invested money with us, you will almost certainly have heard me, or one of my colleagues talking about the emotional cycle of money. This excellent cartoon by my friend Carl Richards at The Behavior Gap illustrates it beautifully. 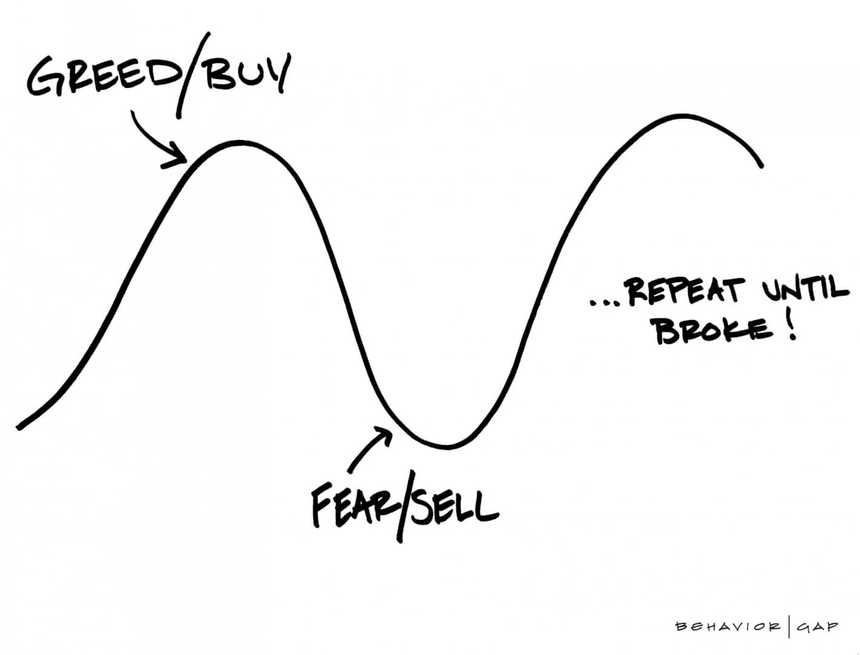 Clients that are new to us usually arrive with a portfolio of investments they have accumulated over the years. One consequence of the emotional cycle is that I can usually have a fair shot at guessing when some of those investments were bought, because there has been a time when that product was doing so well that it was ‘flavour of the month’, and everybody piled in.

It was ever thus, and so it is again – this time with BitCoin.

Can you make money with BitCoin? Yes – some people have made truly vast amounts of money.

Can you lose money? Absolutely, in vast amounts, and in more ways than one. There’s the good old-fashioned way of doing it, by buying the asset when the price is up and selling when it falls (see above). And it is a particularly volatile instrument – just in the first couple of days of 2021, it has fluctuated between a high of £29,981 and a low of £24,901, a drop of 8.5% in a matter of days. During 2018, it dropped by around 80% of its value at one point.

But there are additional fun and inventive ways to lose money with BitCoin, because of its nature. Spare a thought for James Howells, who unintentionally dumped a hard drive containing 7,500 bitcoin in 2013 – an error of judgement that, if he can’t find it, will cost him £208 million at today’s prices. And then there’s Stefan Thomas, who has forgotten the password to his bitcoin wallet – he has two guesses left before his 7,002 bitcoin (worth £195 million as I write) are gone forever. As memory lapses go, that’s an expensive one.

I must confess that I don’t yet really understand cryptocurrencies, of which bitcoin is just the most well-known. That, for me, is reason enough not to get involved.

Here, however, are five things about cryptocurrencies that I definitely can get my head around.

Bitcoin is not an investment, nor is any cryptocurrency. It produces no income, unlike shares (which produce dividends, paid out of the profits of the companies), bonds (interest payments from the companies or governments to whom the money is loaned) or property (rental income). The only way anyone can make money from bitcoin is to sell at a higher price than it was purchased. You make (or lose) money from bitcoin by speculation, not investing.

To be fair, I have, in the past, made exactly the same point about gold, which I also don’t consider to be an investment in the true sense, and for the same reason.

It has no intrinsic value. That is to say, it is not worth anything in and of itself. It has no use whatsoever other than as a means of exchange. And it’s pretty poor at doing that – it can process fewer than ten transactions per second. Plus, its value fluctuates so wildly that you can’t be sure what is being exchanged.

Again, in fairness, pretty much all of the world’s currencies are what are known as fiat currencies: there is nothing backing them except the economy of the country that issues them. The value of more usual currencies such as dollars, euros and pounds sterling also fluctuates, but not to the extent of cryptocurrencies, the price of which has no connection with anything tangible at all.

Because they are untraceable, cryptocurrencies have become the currency of choice for criminal activity, including moneylaundering, and drug and people trafficking. Ransom demands for computer hacking often come with instructions for payments to be made via cryptocurrency.

Something similar could be said for physical cash, but there are very strict rules about the handling of cash to try and prevent moneylaundering, which is why many professions, including our own, check our clients’ identity and the source of their wealth very carefully. Because of the untraceable nature of bitcoin, although the same controls apply, they easily can’t be policed.

That’s even without discussing out-and-out scams, such as One Coin, covered brilliantly in the podcast The Missing Cryptoqueen. Or pump groups, where people meet with the sole aim of coordinating buying of cryptocurrencies to jack up the price, with a view to offloading to the unsuspecting person who comes along next. All of these scams operate on the ‘greater fool’ theory – ok, I might be stupid to buy this stuff, but there will always be someone coming behind to take it off my hands at an even higher price.

It is shockingly profligate with resources. Because bitcoins are generated (or ‘mined’) digitally, and records have to be maintained on servers running 24/7, the energy consumption of the bitcoin platform is staggering. Yes, in this day and age pretty much all financial records are held digitally, but the effect of this pales into insignificance besides cryptocurrencies. According to the Bitcoin Energy Consumption Index, it ‘represents close to half of the current global data centre electricity use’. Its carbon footprint is equivalent to that of New Zealand, and its energy consumption equivalent to that of Chile.

Even once mined, bitcoins are kept on a register (electronic) and if you want to spend them, that’s electronic too. The average energy consumption for one bitcoin transaction is estimated at 741 kilowatt hours; by comparison it takes 149 kWh, not for one Visa transaction, but for 100,000 of them!

There is no investor protection for bitcoin owners. None. Zip. Nada.

The FCA doesn’t even regulate the sale of bitcoin, and have gone so far as to ban the sale of derivatives or other instruments that are based on cryptoassets.

Having said all that, from what I have read and heard, it seems fairly likely that blockchain, the technology that underlies all cryptocurrencies, may well have widespread use in financial transactions and record-keeping in the future. It may even be that cryptocurrency, perhaps even bitcoin, will have a part to play. But there are a number of technology and regulatory hurdles to be overcome, perhaps taking years, before it becomes mainstream.

To quote The Economist, ‘Bitcoin was originally sold on the promise of upending the global monetary system. Its success now hinges on finding a more modest role within it.’

As ever, we would love to hear from you, if you have any comments about this or any other of our blogs, if you have any financial planning queries we can help you with, or if you just need a chat about what’s going on in your life. We are here to help.

Please note that the sale of BitCoin is not a regulated activity, and therefore we cannot provide advice or assistance on BitCoin or any other cryptoasset activities.

All bitcoin prices sourced at Morningstar. Prices can rise and fall, often dramatically. If you buy bitcoin, you could get back less than your original stake, and could lose everything you invested.